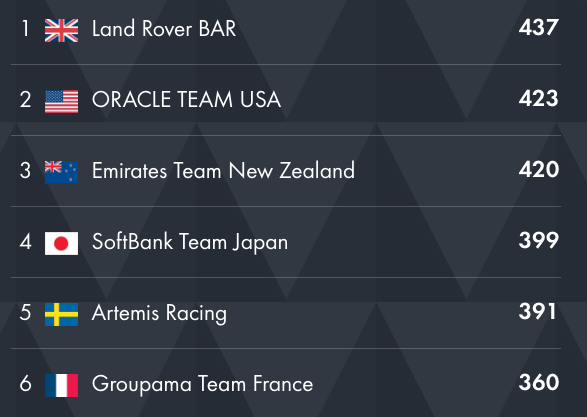 Land Rover BAR leads the series, 14 points ahead of Oracle Team USA and 17 ahead of Emirates Team New Zealand. These three teams have traded places at the top of the leaderboard all through the America’s Cup World Series. Remember that that top two teams in the series carry bonus points into next year’s round robin AC Qualifiers in Bermuda – two points for the series winner and one for the runner up. With one event left, in Fukuoka, Japan in November, the arithmetic says any of the three could win still win the series, but past performance says it’s unlikely either Oracle or the Kiwis can close the gap on BAR, who are likely to finish on top. With only three points separating them, Oracle and Team New Zealand will be battling for the remaining bonus point.

Chances for the other three teams are between slim and none. Team France is out of contention. Artemis cannot beat BAR and would need something close to a sweep of the regatta in Japan combined with a collapse by Oracle to grab second place. Unlikely. Team Japan has a mathematical chance, but the odds are very long. That said, all six teams need to fight for every remaining point – series standings will be used to break ties at the end of the round robin, when one challenger will be eliminated.