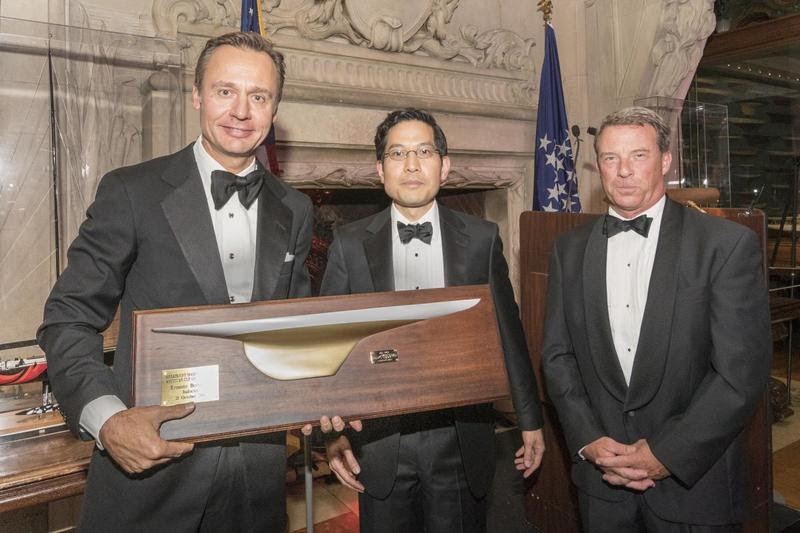 Ernesto Bertarelli (left) received a half-hull of “Reliance” from Steve Tsuchiya (center) chairman of the selection committee and Bill Lynn (right), CEO of the Herreshoff Marine Museum, home of the America’s Cup Hall of Fame. “Reliance” defeated Sir Thomas Lipton’s Shamrock III in 1903 and was Nat Herreshoff’s masterpiece – over 202 feet (60m) from the tip of the bowsprit to the end of the boom, with a bulb keel of 102 tons.

Dunraven was a soldier, journalist, yacht designer, adventurer and statesman. He challenged for the America’s Cup twice, in 1893 and 1895. He was the first person to propose challenger selection trials, but was refused by the New York Yacht Club. His massive yachts Valkyrie II and Valkyrie III ushered in the golden age of the 90 footers. Unfortunately for Dunraven, this was also the beginning of the Herreshoff era. Nathanael Green Herreshoff designed and built yachts that won the America’s Cup six times in a row, beginning with Vigilant in 1893 and Defender in 1895. In 1895, Dunraven chose to believe his advisors who told him that his opponent had cheated by taking on extra ballast at night, lengthening her waterline. An acrimonious and public feud was fought in the press and in an investigation conducted by the New York Yacht Club. “Defender” was cleared of wrong-doing and Dunraven was vilified.

“Anytime you do something that you love, you have that smile on your face.” Watch this video.

Ernesto Bertarelli built his Alinghi team around a core group of Kiwi sailors who had already won the America’s Cup twice – Russell Coutts, Brad Butterworth, Murray Jones, Warwick Fleury, Simon Daubney and Dean Phipps. All of them are now members of the America’s Cup Hall of Fame. He assembled a complete team of designers, managers, boat builders and shore crew. In 2004 he initiated what is now called the America’s Cup World Series, organizing a series of regattas as part of the buildup to the 2007 America’s Cup. The 32nd America’s Cup, held in Valencia, Spain, is the only America’s Cup to turn a profit and pay out shares of the proceeds to all the competitors. After two years of unfriendly competition in the New York courts, Alinghi lost the America’s Cup in 2010 to BMW Oracle Racing, in massive multihulls that recalled the golden era of Dunraven, Lipton and Herreshoff.

Bertarelli gave an eloquent acceptance speech, saying, “The journey that has brought me here was not a solo expedition, but rather one made possible – and shared – by the hundreds of people whose talent, passion and dedication were the DNA of the Alinghi Team. To them all, I say, remember the mission that we set ourselves all those years ago: ‘We want to build a team to be proud of’. We did it!”