Chris Draper and Nathan Outteridge agree that racing foiling moths is both fun and valuable training for the America’s Cup.

Chris Draper: “It’s great to have some of the Cup guys (at the 2014 Moth Worlds). It would be great if we had some more. Maybe in Sorrento (Australia – 2015 Moth Worlds) we could get a few more of the teams. If some of the Oracle boys showed up as well it would be great.   The new (AC62) rule looks great, the boats look awesome. We’re waiting with bated breath for a venue. Both options that are on the table look great.”   (San Diego and Bermuda)

NO:  “I think it’s pretty obvious why the Moth is so important.  The things we learn (sailing the Moth) are so critical to anything that’s foiling. I think everything I’ve learned sailing the Moth over the last five or six years put me a long way ahead when it came to the Cup.  (Talking about AC62’s…) It’s about trying to make the boats perform better than they did the last time, a lot safer than they were the last time, With the rule they’ve come up with for the 62 – it’s going to be a really nice boat… The venue –  hopefully there’s going to be enough wind so that we can not just foil downwind but foil upwind as well.”

The Moth World Championships featured four Olympic medalists including two America’s Cup helsmen. With 131 sailors from 18 countries the competition was stiff. 2011 world champion Nathan Outteridge had top four finishes in all his races to take the trophy.  Luna Rossa’s helmsman Chris Draper, in his first Moth Worlds, finished a respectable 13th with top 10 finishes in six of the 15 races.

Until the Protocol is issued, no one else can officially challenge. But we know who is likely to be racing: 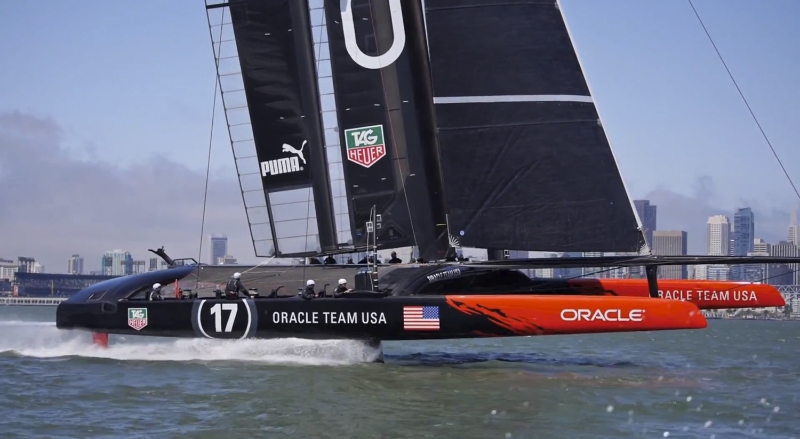 Russell Coutts stays on as CEO, with Grant Simmer as General Manager. OTUSA has re-signed helmsman Jimmy Spithill, strategist Tom Slingsby and grinder Rome Kirby. They have recruited American olympic Laser sailor Andrew Campbell. In addition they have named the core of their design team, stressing that 11 of the 18 designers are American. Some of the sailing team began training in the AC45 with Team Australia in Sydney. They plan to stay until June and have more training “camps” scheduled in 2014. Apparently they have no plans to race in the Extreme Sailing Series. (Image: OTUSA Video) 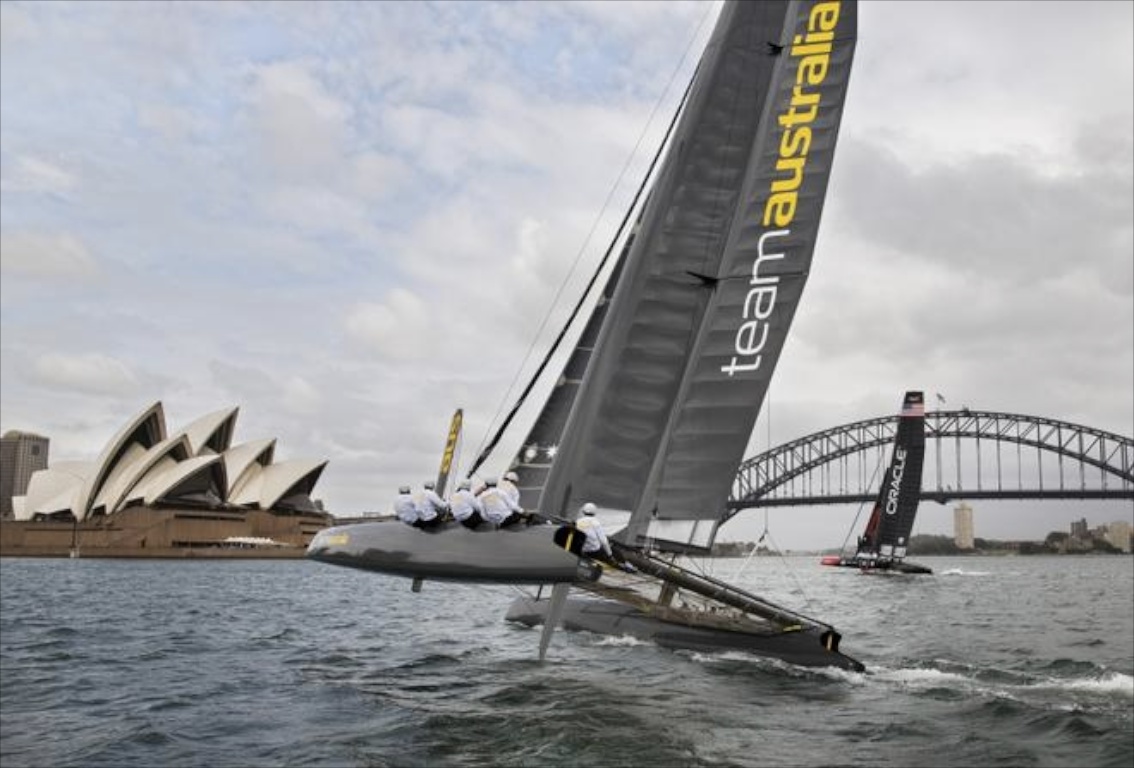 Australian wine tycoons and owners of the Hamilton Island Yacht Club resort, Bob Oatley and his son Sandy initiated the challenge and are underwriting part of the funding. CEO Iain Murray has sailed for years on the Oatley’s fast racing yachts named “Wild Oats.” Murray named Mat Belcher skipper. Mat was the London gold medalist in the 470. Team Australia will race on the Extreme Sailing Series circuit as “GAC Pindar” with 18-Foot Skiff world champion Seve Jarvin as skipper of their X-40. (Photo: Andrea Francolini) 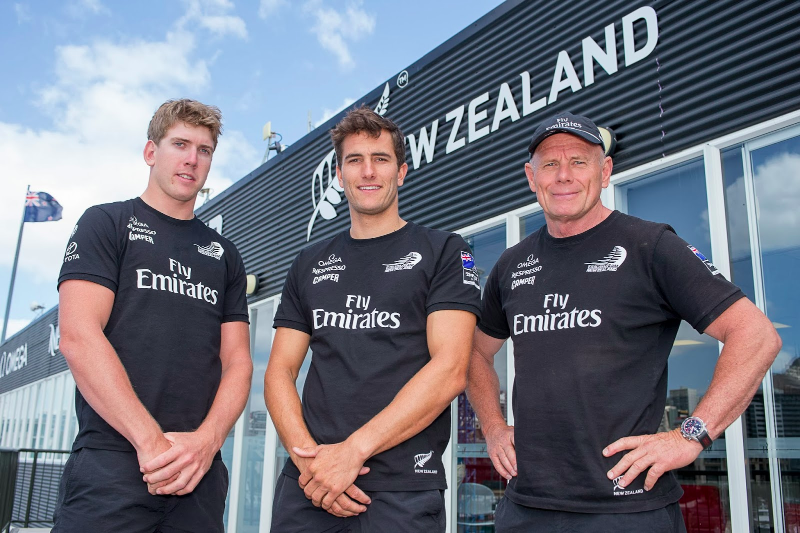 The New Zealand government committed US $4 million to fund the team through May 2014, enabling them to fend off other syndicates trying to poach their talent. Team boss Grant Dalton has been working to line up sponsors. Emirates Airline is still the title sponsor for the team on the Extreme Sailing Series circuit. The ETNZ’s youth team won the Red Bull Youth America’s Cup in 2013. Youth helmsman Peter Burling and trimmer Blair Tuke have joined ETNZ. The pair took the silver medal in the 49er at the 2012 London Olympics. (Photo: Chris Cameron.  L to R: Peter Burling, Blair Tuke, Grant Dalton.) 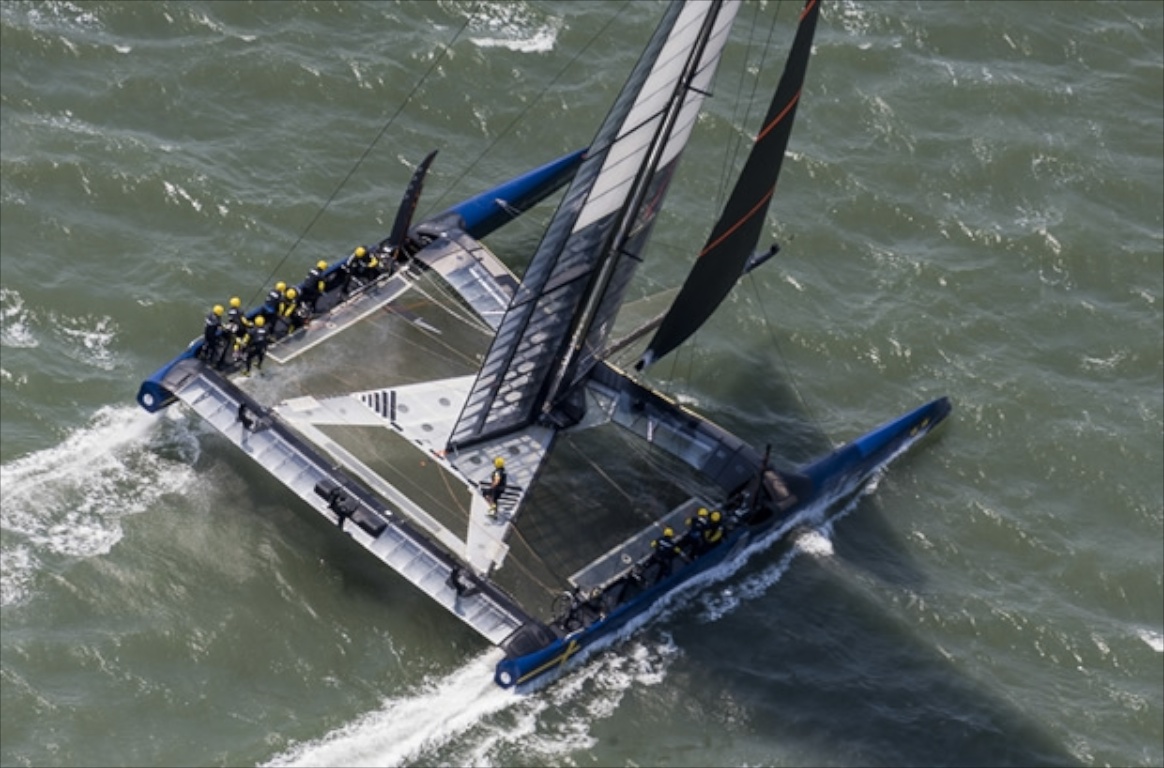 Iain Percy, Team Manager (he did not want the title “CEO”) of Artemis Racing, has publicly stated on multiple occasions that the goal of Artemis Racing is “to dominate” the America’s Cup. Artemis has re-signed helmsman Nathan Outteridge and wing trimmer Iain “Goobs” Jensen. The Artemis team had learned to foil gybe their AC72 in time for their first race of the Louis Vuitton Cup semi-finals, their ninth day of sailing (compared to Luna Rossa’s 75 days of sailing their AC72). Artemis has also re-signed Loïck Peyron as coach, backup helmsman and design team member. They have poached designers from ETNZ and from OTUSA. They will be a force to contend with in the 35th America’s Cup. (Photo: Carlo Borlenghi) 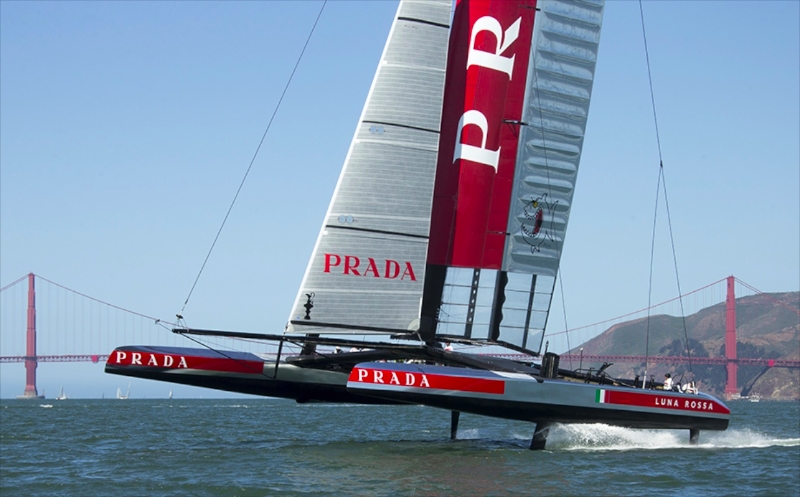 Team owner Patrizio Bertelli has won the Louis Vuitton Cup (2000) and been inducted into the America’s Cup Hall of Fame. His team has set up camp in Sardinia to prepare for his fifth America’s Cup challenge. Luna Rossa bought their AC72 design from ETNZ for the 2013 America’s Cup, so they will need to build up their design team. Like OTUSA, Luna Rossa has shown no plans for racing in the Extreme Sailing Series. Francesco Bruni holds a “tour card” on the World Match Racing Tour and recently defeated Ben Ainslie in the Bermuda Gold Cup, so it appears they will train in 2014 by combining monohull racing on the World Match Race Tour with training in their AC45’s in Sardinia. Luna Rossa recently hired Adam Minoprio, the young Kiwi helmsman who was the 2009 World Match Racing champion. (Photo: Carlo Borlenghi) 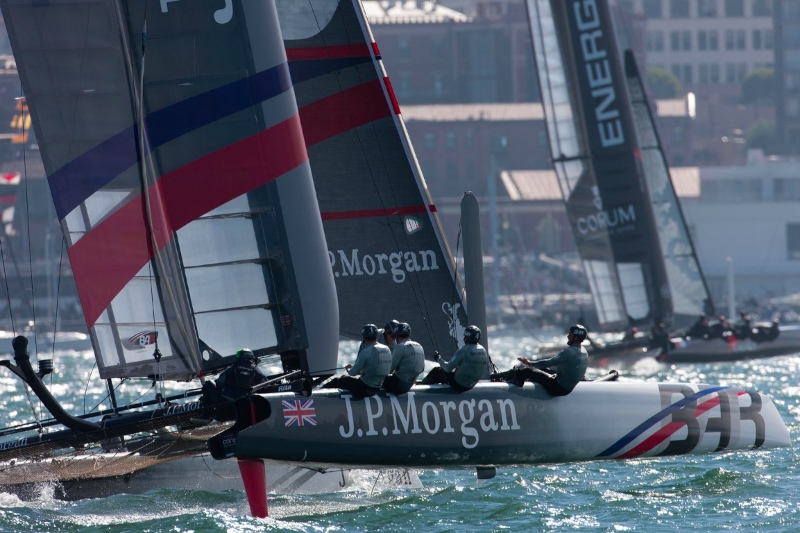 J.P. Morgan sponsors Ainslie’s team on the Extreme Sailing Series. Sir Keith Mills and Charles Dunstone have indicated that they are ready to support Ainslie’s America’s Cup campaign. Reuters reported this week that Ainslie is making good progress towards raising £100 million ($130 million) with about $45 million coming from private investors led by Mills and Dunstone. BAR is racing in the Extreme Sailing Series, finishing seventh at the Singapore regatta in February. 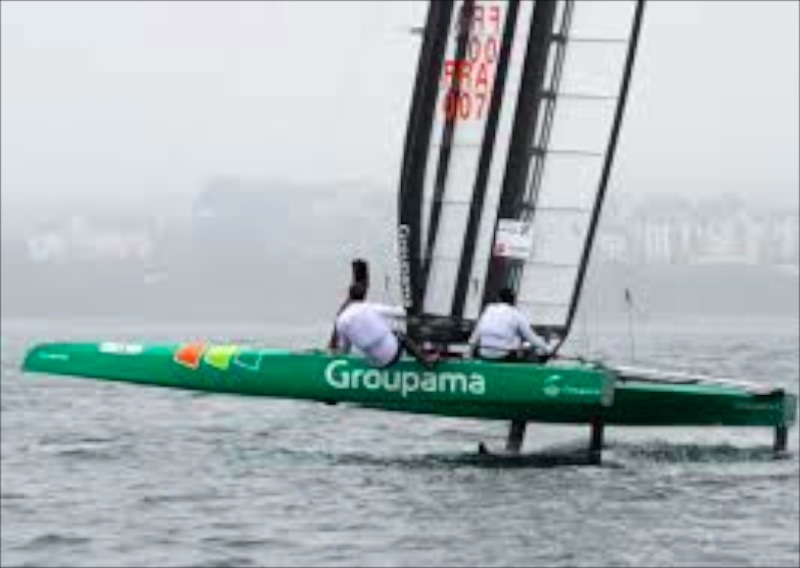 Frank Cammas has won the last Volvo Ocean Race, the “Little America’s Cup” in C-Class catamarans and the Route du Rhum. He set the record for a circumnavigation in 2010, holding the record for two years before Loïck Peyron broke it in 2012. He has won the Bol d’Or in a D35 catamaran on Lake Geneva. He is preparing for the mixed multihull event at the 2016 Rio Olympics with teammate Sophie de Turckheim. French insurance company Groupama has funded his projects including his current Extreme Sailing Series team. They will not fund the Team France America’s Cup challenge, so Cammas will need to find other sponsors. 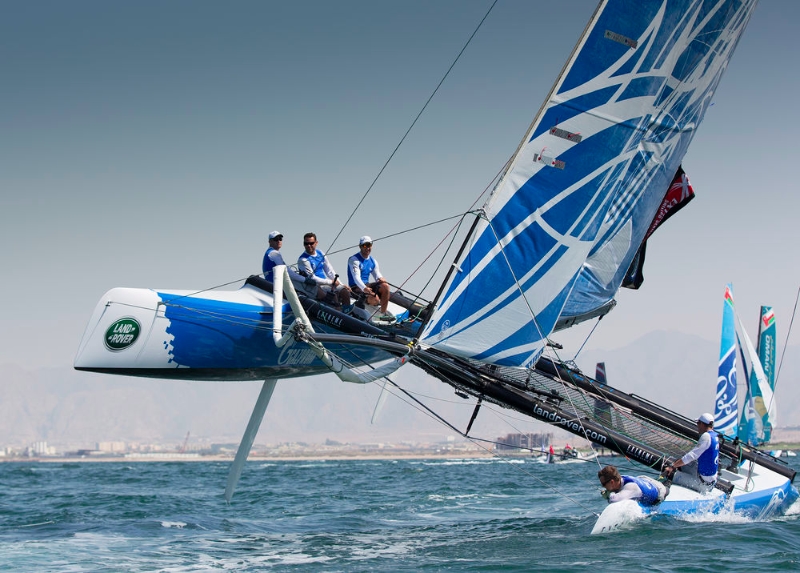 With strong backing from Gazprom, the 21st largest company in the world, this Russian team would have the means to mount a campaign for the 35th America’s Cup. They have recruited Paul Campbell-James as helmsman. Paul won the Extreme Sailing Series in 2010 at the helm of The Wave, Muscat and in 2011 as helmsman for Luna Rossa. Team Russia also has the 2009 winner on board, Pete Cumming, who helmed Oman Sail Masirah. The team represents the Saint Petersburg Yacht Club, whose Commodore Vladimir Liubomirov has declared his desire to challenge for the 35th America’s Cup. A decision may depend on how they perform at the Saint Petersburg Extreme regatta in June. (Image: Lloyd Images)

Loïck Peyron has rejoined Artemis Racing for their campaign in the 35th America’s Cup, to be held in 2017.

When he was helmsman for Alinghi in the 2010 America’s Cup deed of gift match, he called himself the Swiss Army knife of the team. It seems he will play a similar role with Artemis, as a member of the design team, as backup helmsan and as technical coach for the sailing team.

Artemis helmsman Nathan Outteridge said, “To be able to tap into Loïck’s unrivalled experience of multihull sailing, and his connection not just with the sailors but with the designers as well, is a big skill to have within the team”. Loïck is one of the most experienced and successful multihull sailors in history, having crossed the Atlantic 48 times including eighteen single-handedly. He has an outstanding record of achievement: five ORMA champion titles, sixteen Grand Prix victories, three Single-handed Transatlantic Race victories and two victories in the Transat Jacques Vabre in 1999 and 2005. In 2011 he won the Barcelona World Race in a monohull, went on to win the Trophée SNSM, and then set the Round Britain and Ireland record aboard the Banque Populair V maxi-trimaran.

He currently holds the Jules Verne Trophy for the fastest circumnavigation of the world in just 45 days with Banque Populaire V in 2012.

Artemis Racing team leader Iain Percy has said their goal is to build a team that can dominate the America’s Cup. Adding Loïck Peyron demonstrates that they are serious.

Christian Kamp has joined Artemis Racing as trimmer. Christian was the 2010 Danish sailor of the year. He has won three world championships, over 20 Grade 1 Match Racing titles and sailed on board Team Aqua on the RC44 circuit, winning the season championship for the last three years.

Former Oracle Team USA team member Richard Kent will lead the Artemis Electronics unit. Kent knows the America’s Cup well, competing in the last four. He was with Oracle for their 2010 win in the 33rd America’s Cup and for their successful defense, last year in San Francsico. He also ran the electronics departments for winning Volvo Ocean Race teams ABN AMRO (2006/2007) and Ericsson Racing (2008/2009).

Chay McIntosh will once again lead the shore team for Artemis. Chay won the 29th and 30th America’s Cups with Team New Zealand in 1995 and 2000, and the 2008/09 Volvo Ocean Race with Ericsson Racing.