When Team Australia withdrew as Challenger of Record last July, Luna Rossa was next in line. They decided to form a Challenger Committee to deal with Protocol changes proposed by the defender. What were they thinking? They gave up the power to veto any Protocol changes and left themselves vulnerable to a simple majority vote. In late March, ACEA announced plans to jettison the AC62 Class. Luna Rossa threatened to withdraw, pointing out that it was too late to make such a change and believing that the design rule should only be changed by a unanimous vote. Oracle’s proposal was not to change the AC62 Class Rule, but to discard it. They claimed this manoeuvre was a change to the Protocol, not a change to the design class. On March 31, Artemis, BAR and Team France voted to accept Oracle’s proposal to change the Protocol, dropping the AC62 and replacing it with the “America’s Cup Class.”  Luna Ross was good to their word and promptly withdrew from the America’s Cup and cancelled the Cagliari America’s Cup World Series regatta, which was to have been held in June.

Recent decisions by ACEA, Oracle and three of the challengers (Artemis, BAR and Team France) have mystified close followers of the America’s Cup and the two other challengers (Luna Rossa and Team New Zealand). The class of boat has been changed. The AC Qualifiers have been pulled from Auckland. One or two mysterious Asian teams have been announced as potential challengers. There is a deadline on May 1 for all teams to pay the balance of their entry fee ($900K) plus the $1 million performance bond. Read my summary here and here.

“The natural conditon is one of insurmounta 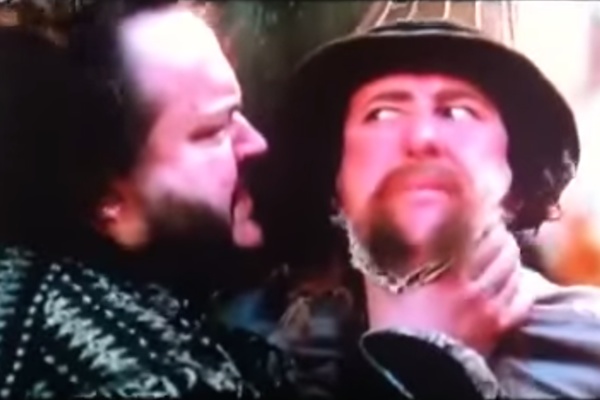 ble obstacles on the road to imminent disaster.”
“So what do we do?”
“Nothing. Strangely, it turns out well.”
“How?”
“I don’t know. It’s a miracle.”

Impresario Fennyman explains the theater to his financial backer Henslowe.

Our timing was good: On March 31st,  the very day the competitors were voting against Luna Rossa and Team New Zealand, and replacing the AC62 with the smaller, almost one design “America’s Cup Class,” an enthusiastic group gathered online to watch and discuss videos and photos that show why the new class will be exciting to race.

We looked at five photos and two videos showing the Artemis and Oracle boats. You can see the photos and watch the videos here. Thanks to John Navas for the great footage of these boats training on San Francisco Bay. I’ve taken highlights from John’s videos to show the manoeuvers the teams have been drilling.

Team owner Patrizio Bertelli withdrew his challenge for the America’s Cup when he was out voted on a decision to change the size of boat that will be raced. The AC62 was dropped in favor of a new 48 foot long “America’s Cup Class” foiling wing sail catamaran with a crew of six.

Luna Rossa and Emirates Team New Zealand voted against the change, but were on the losing side of the vote, with challengers Artemis Racing, Ben Ainslie Racing and Team France all voting for the change, which was proposed by defender Oracle Team USA. Ironically, Luna Rossa would have been able to veto the change had they kept their role as Challenger of Record, replacing Team Australia, who withdrew in July 2014. Instead, at Luna Rossa’s suggestion, a Challenger Committee was formed, operating on a simple majority for changes to the Protocol.

Bertelli had harsh words in his press release about the change, calling it “illegitimate… an evident abuse of process by surreptitious use of procedures.” The other teams had equally harsh words for Bertelli in a joint statement: “Regrettably, abiding by the results of the majority vote appears to be something neither they, nor Team New Zealand, are (sic) willing to do… unless they are part of the majority.”

Although Bertelli declared that Luna Rossa “will honor all of its contractual obligations” to team members and others, this is clearly a blow to the team.

“I have spent the last 16 months with an amazing group of people, working our asses off. Absolutely gutted we won’t get to show the world. @DraperChris”

The America’s Cup challengers voted 3-2 to change the Protocol and race in “America’s Cup Class” 48 foot catamarans instead of the AC62 class that had been announced 10 months earlier.

As is often the case, politics were part of the mix. Luna Rossa and Emirates Team New Zealand voted against the change. After the vote, Luna Rossa carried through on their threat to withdraw from the America’s Cup. They complained that it was too late in the cycle to change the class of boat used. ETNZ claimed that the decision was linked to the choice of venue for the America’s Cup Qualifiers, saying that ACEA offered to hold the AC Qualifiers in Bermuda rather than Auckland if the new class were to be accepted – european teams were reportedly strongly against holding the AC Qualifiers in Auckland.

Reasons given for making the change were cost savings and the surprisingly good performance and manoeuverability of the test boats that Artemis Racing and Oracle Team USA launched on San Francisco Bay. OTUSA reportedly has hit over 46 knots. Artemis has been seen foiling upwind and executing roll tacks, even attempting foil to foil tacks.

Cup Experience Club members can take a closer look at the AC45 “Turbo” boats. Five marked up photos and two videos show the details and the impressive performance that convinced ACEA to propose moving to the new, smaller America’s Cup Class. Bronze level member ship is FREE – all we need is your email address.