America’s Cup Class catamarans racing for the first time! Watch the pre-start between Oracle’s Jimmy Spithill and Land Rover BAR’s Ben Ainslie. With port tack entry, Oracle is allowed to enter the starting box 10 seconds ahead of starboard tack, right of way Land Rover BAR. But they are late and cannot cross in front of BAR. Both boats go into a dial up.

Winner of the 2013 America’s Cup in San Francisco, USA 17 has become a permanent exhibit at Mariners’ Museum in Newport News, Virginia. She will be the highlight of an America’s Cup exhibition, “Speed and Innovation,” which will open in May 2017. I got the chance to climb over and inside USA 17 during my recent meetings at the museum in my role as “guest curator” of the upcoming exhibit.

If you read on, I’ll take you deep in the weeds with details only America’s Cup geeks like me enjoy. Proceed at your own risk.

In the previous photo, did you notice those two circles on the centerline? The forward one is the mast step. The aft one was not used, but was prepared when the designers considered moving the wing aft to counter the lee helm problem. I wrote about this in my book “Turning the Tide” – so it was very cool to see it.

Here’s a video that will show how important the button was. This is from Race 4, at Gate 2, the end of the first downwind leg. Ouch! In spite of the error, Oracle won this race, their first win. The error shows that early in the America’s Cup Match, they had still not mastered how to sail the boat. But by the finish of Race 8, their second win, they had improved dramatically, and were on their way to winning, even though at that point the score was 6-0 for the Kiwis.

Grinder Simeon Tienpont was called “Hydro” because he ran a lot of the hydraulic controls on the boat. Some of his controls are shown in the next two photos. Not shown are the controls to switch the flow of oil between hulls and the controls for daggerboard cant. A lot of hardware was stripped out of the hulls long before USA 17 was donated to the Mariners’ Museum.

The next three photos show polar info that was left in the hulls.

Sailor Graeme Spence went overboard when Oracle Team USA’s America’s Cup Class yacht dropped off the foils in training on Wednesday 22 February 2017. Graeme was lucky not to be hit by the daggerboard or rudder. Remember that Franck Cammas of Groupama Team France almost lost his right foot when he was hit by the rudder after going overboard in training in France in November 2015. Read about Franck’s ordeal here, here and here.

I’m on my way today to Newport News to help plan the “Speed and Innovation in the America’s Cup” exhibit that will open in May. I’ve been asked to be “guest curator” – an honor and a lot of fun, working with a great team. 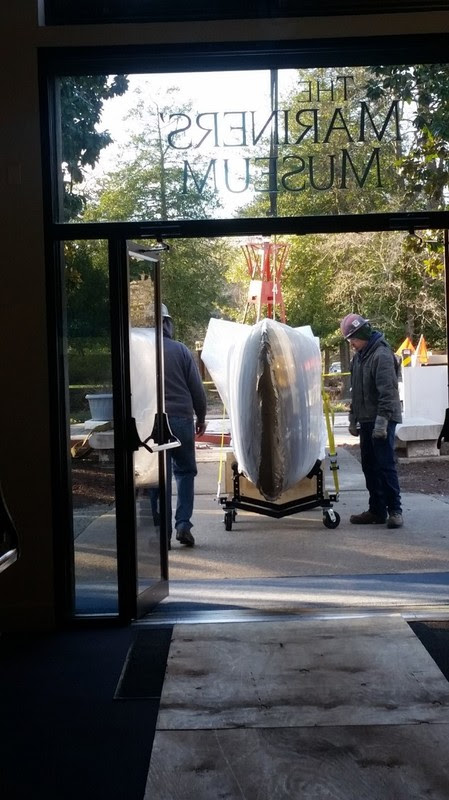 Oracle unveiled their America’s Cup Class race boat on Valentine’s day at an evening party for team members and families and a few Bermudian dignitaries. The boat was illuminated in its hangar. The aerodynamic fairings were the only “proprietary” parts on display – no sign of the daggerboards or rudders, and no opportunity to look into the cockpits at control panels.

The next day the team christened the boat and put her in the water for the first time.