Some people have questioned whether Oracle Team USA had a secret (and illegal) foil control system in their AC72 that helped them defend the America’s Cup.

OTUSA has released drawings and photos of their system, which used a simple “mechanical feedback” loop to allow precise control of the daggerboard rake. Helmsman Jimmy Spithill had buttons on the wheel to rake the daggerboard fore and aft in precise increments of 0.5° giving him better control over lift for hydrofoiling.

OTUSA designers Dimitri Despierres (mechanical systems) and Eduardo Aldaz Carroll (electronic systems) began work in late June 2013 to help the team gybe better. The goal was to reduce distance lost in a gybe from 150 meters to 30 meters. To do this the engineers needed to deal with the problem that board movement varied depending on hydraulic pressure, making it impossible to control lift. What they needed was a way to move the board a fixed amount independent of the pressure and drag load on the board. Within a month, mechanical engineer Alex Davis developed a test bench with a servo control, hydraulic valve and hydraulic ram to simulate movement of the daggerboard box (see photo below).

Once the test bed system worked, the system was tested on board. Accuracy was fine, but it reacted too slowly. Mechanical engineer Neil Wilkinson and hydraulics specialist Rolf Engelberts improved the system to improve response speed and make everything more reliable and robust.

The hydraulic ram for rake is not visible in the photo below, but you can see the rams for board cant, as well as the daggerboard cage and daggerboard box. The box moves within the cage, which is fixed in the hull.

OTUSA wanted to make sure their system complied with the AC72 Class Rule. They filed a “Public Inquiry” to the Measurement Committee and got approval on 8 August 2013 – only a month before the America’s Cup Match was to begin. Team New Zealand then tried to have OTUSA’s system ruled illegal but the Measurement Committee stood by their initial decision and the International Jury ruled that New Zealand’s protest was made too late, but would not have succeeded even if it had been filed on time. The marked up schematic below was part of Team New Zealand’s submission. OTUSA eliminated the spring labeled “Component X” making the TNZ protest moot.

In July, OTUSA was not able to do foiling gybes as consistently as Team New Zealand. They were losing about 150 meters on their “good” gybes, and they felt they needed to get that down to about 30 meters. By early August, their engineers had developed a new foil control system that allowed them to gybe smoothly.

Using a “mechanical feedback loop” helmsman Jimmy Spithill was able to change the angle of the daggerboards in increments of 0.5° giving dramatically more stable foiling.

Lots more details and marked up photos and diagrams here. 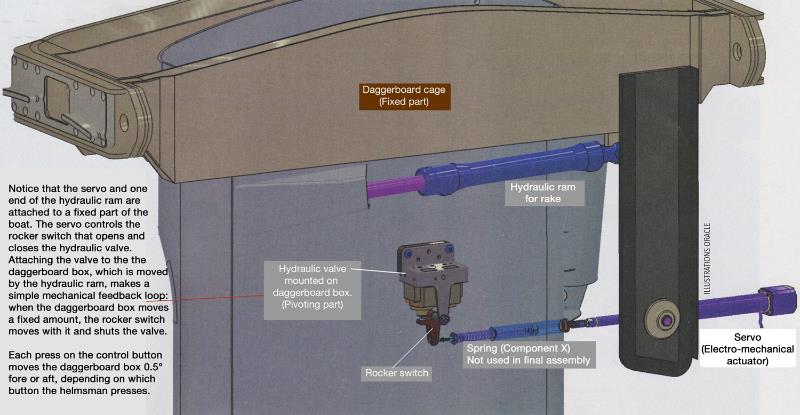 Mounting the hydraulic valve on the movable daggerboard box, and the servo that controlled it on the fixed part of the boat allowed the helmsman to adjust the boards very precisely. More info here.

Each press on the buttons changed the daggerboard rake by 0.5° – precise control for stable hydrofoiling.

Oracle Team USA expected their slippery aerodynamic shape to give the the edge upwind. They were surprised that Team New Zealand had more speed upwind. Team New Zealand was much faster through the tacks until about Race 8 when Team USA had mastered “roll tacking” – using their foils to lift the bows. 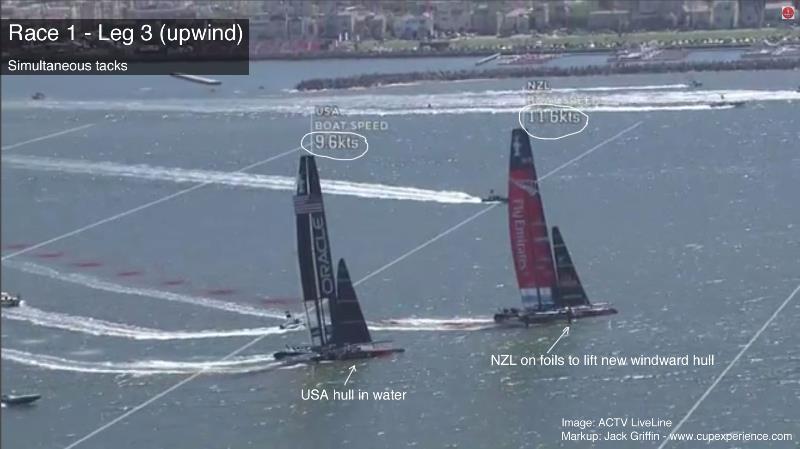 In the early races Team USA was slow through their tacks, pushing a lot of water sideways. By Race 8 they dramatically improved their tacking. 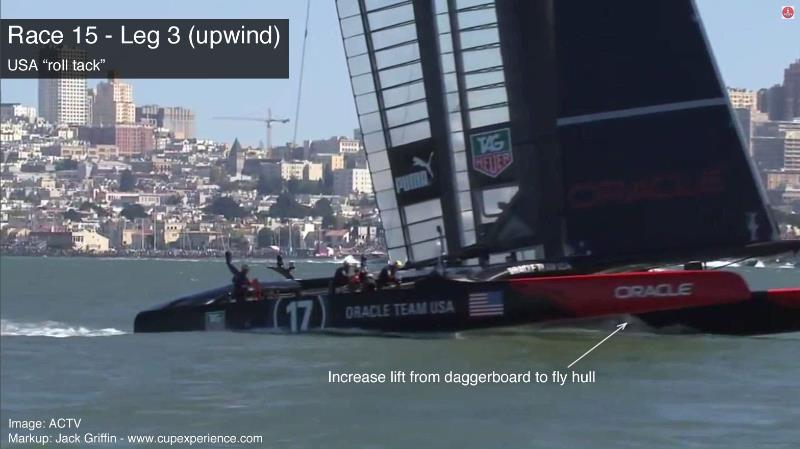 Team USA learned to use their foils to lift their bows in a “roll tack.”

In Race 10, OTUSA made two tactical decisions that both turned out badly, and ETNZ went on for the win. Let’s look at these two situations.

After swapping the lead twice on the upwind leg, ETNZ sailed high and slow, to be able to duck OTUSA and still lay the right hand mark at Gate 3. With starboard advantage, OTUSA might have slowed down to prevent ETNZ from laying the mark. Or they might have tacked in front of ETNZ and rounded the right hand mark – Rule 18 gave them rights to mark room. Instead, they maintained speed, crossed in front and rounded the left hand mark, giving ETNZ the right side and starboard advantage on the downwind leg.

Oracle needs to win seven in a row.

Oracle dominated the start of Race 12, then showed speed with upwind foiling. If that had been the first race, we would assume they would win 9-0. But now ETNZ only needs to win one of the next seven races to take the Cup.

Dominating the start and foiling upwind – enough for a comeback?

If this had been the first race of the AC Match, most people would assume that OTUSA would dominate the Match and win 9-0. But now ETNZ takes the Cup if they win one more time, and OTUSA needs to win seven more, in a row. The comeback seems possible, but unlikely…

Emirates Team New Zealand needs to win two more races to score nine points and take the America’s Cup. With their three race wins, Oracle Team USA erased their two point penalty and scored one point. They need to win eight more races to defend and keep the Cup. Two scheduled races were not sailed: OTUSA used their “postponement card” to cancel the second race on Tuesday, September 12. The second race on Saturday, September 14 was abandoned because the wind limits were reached.

The broadcast schedule is available here. The schedule of remaining races is:

Even in the midst of the competition, the teams continue to develop their boats with modifications to make them faster.

Dean Barker led ETNZ back to winning ways in Race 10 in perhaps the most hard fought race in America’s Cup history. During the race, each team tacked seven times and gybed seven times. On the upwind leg, the boats met seven times and the lead changed three times.

“It was very important to bounce back after the first race; the Oracle boat sailed a great race and gave us no opportunities,” said Barker. “The second race was close across the first reach; they touched the water once, which gave us the lead at the mark. We felt strong at the bottom mark but they sailed a good upwind leg and were right there at the top.”

Watch the video of the pre-start and first leg.

Look carefully during the first leg and you’ll see the splash when OTUSA came off the foils and touched down. That allowed ETNZ to get an overlap and rights to the inside lane at the mark. Without the overlap, OTUSA would have been able to shut the door on ETNZ at the mark.  … and the outcome of the race might have been very different!
Video: ACTV 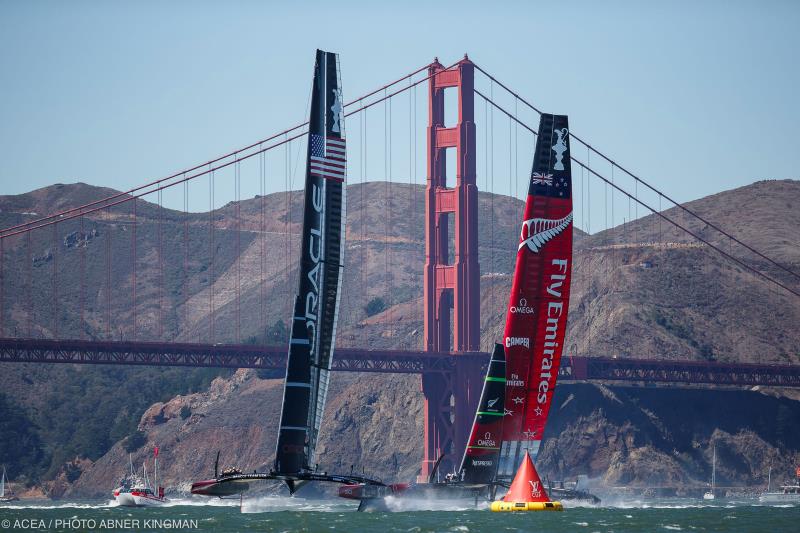 Skipper Jimmy Spithill did a masterful job in the pre-start, gaining a position to leeward of Emirates Team New Zealand late in the 2-minute sequence and preventing the Kiwis from entering the racecourse. Spithill and crew led at the first mark by 4 seconds and then sped away from the challenger, gaining time on every leg of the course with their new found boatspeed.

All images below: ACTV

Racing has been close, and OTUSA has found new speed and won three races. But their two point penalty from the International Jury means they still need to win eight to keep the Cup, while ETNZ needs only two more wins to take it back to Auckland.

OTUSA continues to modify their boat, searching for speed. On Saturday 14 September they seem to have found a faster configuration. They removed the longer bowsprit since they do not use their big downwind sail, the gennaker, in the strong winds we have been seeing. During the press conference, skipper Jimmy Spithill said there were other changes we cannot see, and more changes yet to come. 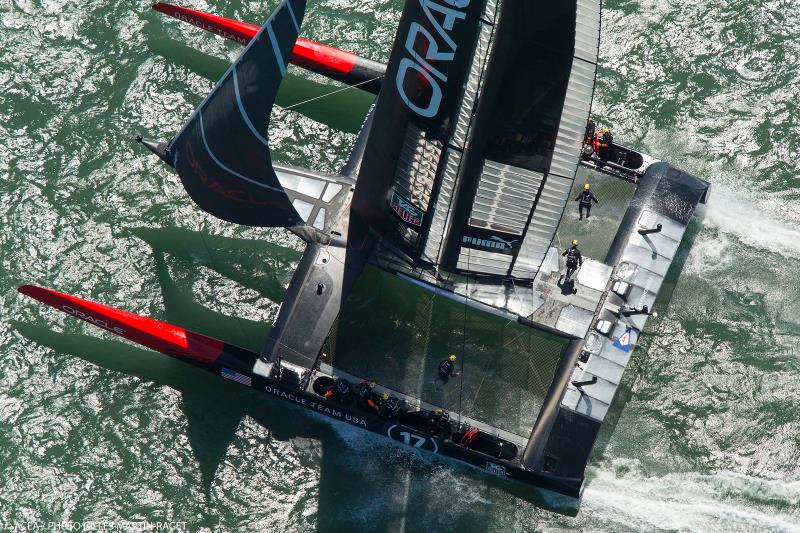 A good view of the shorter bowsprit on OTUSA. They were faster upwind and more efficient when tacking in Race 8. Have they found the formula to grab the winning momentum away from ETNZ?

ETNZ had been consistently stronger on the upwind legs with more speed and better crew work in the tacks. In racing on Thursday 12 September, they gained over 50 seconds on the upwind leg in each of Race 6 and Race 7. (The America’s Cup race course has only one upwind leg.)

But OTUSA may now have shifted the momentum of the Match by winning Saturday’s Race 8. For the first time Oracle was faster than the Kiwis upwind, and their crew work looked much sharper. Will they be able to keep winning on Sunday 15 September? 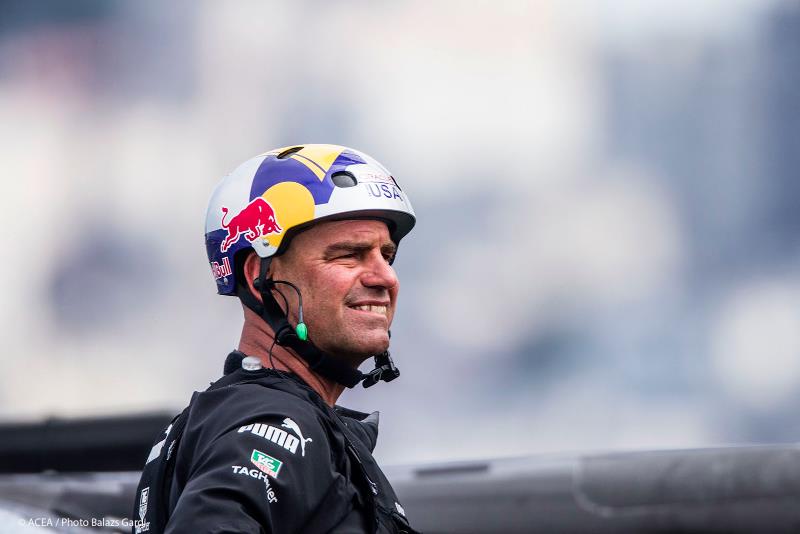 Oracle Team USA removed tactician John Kostecki from their lineup following Race 5. Four time Olympic gold medalist Ben Ainslie replaced Kostecki. OTUSA had been leading Race 5 when a tactical mistake at the first leeward gate set the stage for the Kiwis to take the lead about halfway up the beat to windward. 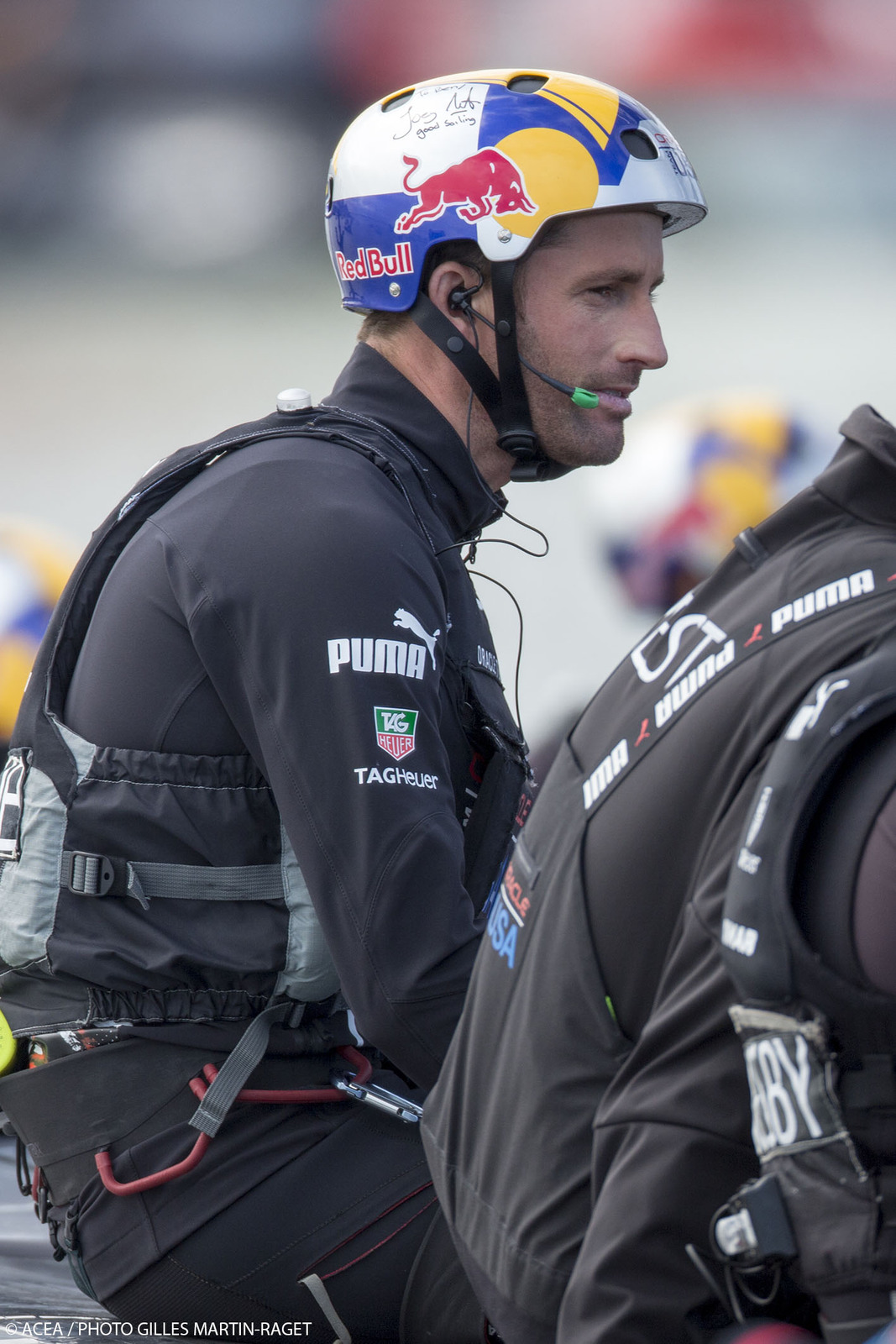 Bringing four time gold medal winner Ben Ainslie on board as tactician did not end Oracle’s problems – they lost both Race 6 and Race 7 on Thursday 12 September.

Emirates Team New Zealand nearly capsized in Race 8 on Saturday 14 September. A tacking duel between ETNZ and Oracle Team USA produced the most dramatic moment of the America’s Cup. ETNZ, on port tack, tried to tack in front of OTUSA but did not have enough hydraulic pressure to change the camber in their wing from port to starboard. OTUSA, with right of way, needed to make a quick maneuver to avoid the Kiwi boat, resulting in a penalty on the Kiwis. OTUSA took over the lead and extended to take the win by 52 seconds – over 1,000 meters.

The penalties were given because the team sailed with illegally modified AC45’s during the AC World Series. Read a more detailed explanation here. 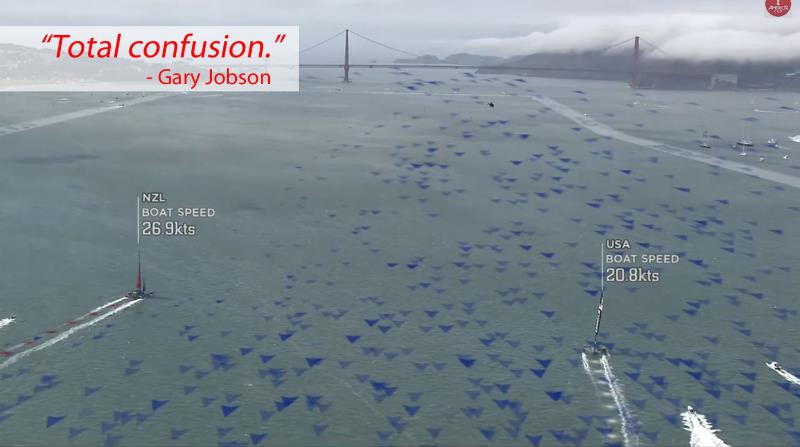 Tactical mistakes and poor tacking cost the race. After a strong start gave them the early lead, OTUSA made tactical errors that allowed the Kiwis to gain the lead and extend to win easily. A foiling tack at the downwind gate turned out to be a poor choice, as it gave New Zealand a chance to take the lead.

More photos and an analysis of the race here. 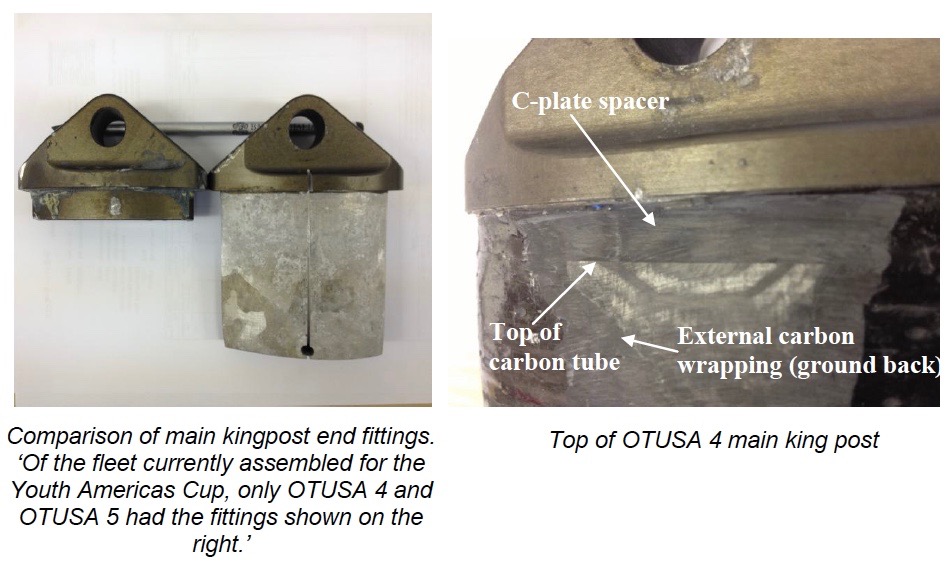 Emirates Team New Zealand sets the standard in the AC72. Watch them complete a gybe while staying up on the foils.

Here is an amateur video of Oracle Team USA foiling through a gybe while training.

In the same video you can see footage of Artemis training yesterday, Tuesday 30 July 2013.